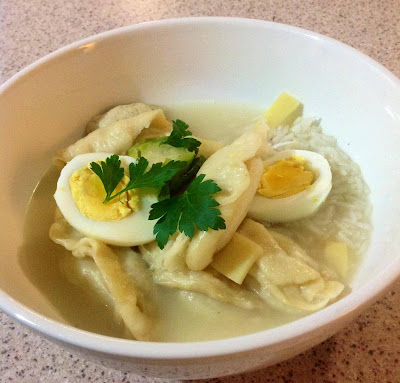 Now, this looks like a long recipe but that's just because it's 3 recipes in one. Any of these can be made on their own. The wontons dough can be made and stored in the freezer (in balls). The broth can be made and frozen for a quick soup. Each step is very easy. Go for it!! One step at a time.

DUMPLING FILLING:
1/2 stick celery roughly chopped
3 shallots roughly chopped (pre roasted adds a lovely caramel flavour - just dob with nuttelex and bake for 10 minutes at 190 degrees when you are baking. I bake bulbs of garlic too)
1/4 tin water chestnuts (or not at all if your kids hate them)
1 tsp salt (or veggie salt if able)
2 small or 1 large chicken breast cubed and semi frozen.
1 tbsp FAILSAFE soy sauce* - if you are not sensitive to normal soy sauce - of course use that!!! 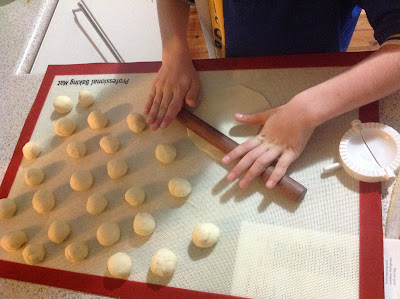 Wonton Dough:
Into TM bowl add the Tapioca, flour, salt, baking powder and lard. Mix on speed 6 for 8-10 seconds. (it depends how hard your nut telex/lard is. You will hear the sound change as it is forming a breadcrumb like consistency).
Add the boiling water and mix on Interval speed, 15 seconds. Scrape down the sides and need for a further 20-30 seconds on interval speed, drizzling in bits of the cold water as it is mixing and watching for the mix to start clumping. Tip out the mix and knead it into a ball. Ideally, let the mix rest for 20 minutes or more so the proteins relax again and your mix is flexible.

Make little balls just smaller than a ping pong ball (pictured above). when you are ready to make the dumplings, roll the balls out.

Dumpling Filling:
If you are just using fresh shallots, then chop them on speed 7 for 2 seconds, and saute for 3 minutes, Varoma temperature, speed 1.5 with extra 20g oil and a pinch of brown sugar.
Add all the ingredients except the diced chicken and chop for 3 seconds speed 7.
Add chicken and FAILSAFE soy sauce and pulse on turbo (locked lid position), 6 times. The mix should be clumping together nicely.
Tip this out into a bowl and cover, ready for making dumplings.

To make the dumplings:
Roll out a ball of dough. Place it in a dumpling press (or follow these instructions for making wontons)
and add only a heaped teaspoon of dumpling mix. Wet the edges of the wrapper and press lightly.
Place only a slightly damp plate awaiting cooking.
If you think you can make all your dumplings in about 25 minutes, you can get your broth cooking and then start making them.

Broth:
Put the leek and garlic into the TM bowl and chop for 2 seconds speed 7.
Add oil and cook 3 minutes, Varoma temperature, speed 2.
Into the simmering basket (the one used for cooking rice), put your chicken carcass and all the remaining vegetables into the basket and place in the TM bowl.
Weigh in 1.1kg of water and add the salt.
Cook for 23 minutes, Varoma temperature speed 3.

Set Varoma above and add whole eggs to the bottom shelf.

When timer is up, set a further 13 minutes, Varoma temperature speed 3, and add dumplings to the Varoma tray.

When finished. Set aside Varoma. Use TM spatula to tip out basket contents leaving the broth in the TM bowl. Then using tongs, put any hard boiled eggs in the basket to run under cold water.

Into your bowl place your extras: rice/bokchoy/halved eggs, pour over broth, add dumplings and dinner is served.